This playthrough shows me trying out Fortnite: Endgame; the Fortnite event based on Marvel Studios‘ Avengers: Endgame to promote the film while it was playing in theaters while this event was still available.

Endgame randomly places players in either the Avengers‘ Team, who play as their normally chosen characters with a Rare Assault Rifle and a Rare Tactical Shotgun already at each player’s disposal as well as a treasure map which leads to a treasure chest that players can dig up with their pickax to uncover 1 of 4 usable weapons based on Avengers heroes (Hawkeye‘s Bow [which allows players to fire explosive arrows at enemy players and shoot grapple arrows to grapple onto anything on the map to swing towards the grappled area to move higher, farther, and faster], Iron Man‘s Repulsors [which allows players to hover and shoot plasma shots from the palms of the gauntlets], Thor‘s Stormbreaker [which, based off of its appearance in both Infinity War and Endgame, allows players to throw the weapon like a boomerang, leap onto a farther area faster while also striking the ground dealing damage to enemy players and the in-game environment, and swing it like a normal melee weapon dealing massive damage to enemy players], and Captain America‘s Shield [which grants players extra speed and allows them to shield most attacks without taking any damage and throw the shield like a boomerang, which also acts as a homing projectile as it homes in on the nearest enemy player before coming back to the user]), or the Chitauri Team, whose characters’ appearances are changed into that of the Chitauri and they cannot interact with anything like they are usually allowed to when playing Fortnite normally, and are automatically equipped with a Chitauri Laser Rifle (a regular plasma-shooting weapon), a Chitauri Energy Launcher (which can be charged to blast a big plasma shot that deals plenty of damage to an enemy player and literally disintegrates any breakable environmental obstacle within its blast radius), and a Chitauri Jetpack (which allows players to fly for a short while per usage).

The Avengers Team has unlimited respawns and is tasked with protecting the Infinity Stones and preventing the Chitauri Team from collecting them. Players on the Avengers team must eliminate the Chitauri Team as many times until their spawn count reaches 0. When that happens, the Chitauri can no longer respawn and The Avengers Team wins when all the Chitauri are eliminated. Players are equipped with a Rare Assault Rifle and a Rare Tactical Shotgun and can also follow an already equipped treasure map that leads to buried treasure. Players can dig up their buried treasure with their pickax and open a treasure chest to uncover 1 of 4 of the aforementioned Avengers-themed weapons that grants players new abilities to help them in defeating the Chitauri players. 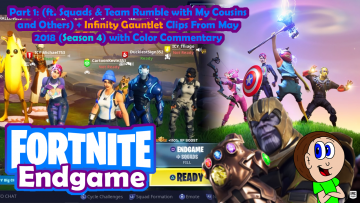 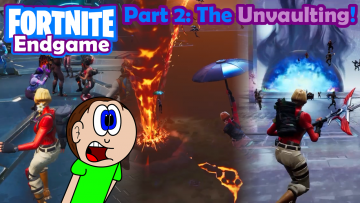 This playthrough shows me trying out Fortnite: Endgame; the Fortnite event based on Marvel Studios‘ Avengers: Endgame to promo...
0
781
3
0 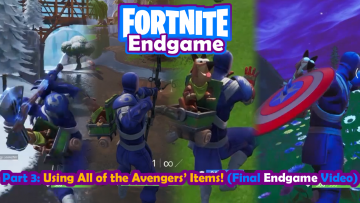