This game is a direct sequel to Rayman Origins. Here, Rayman and his pals, Globox, Barbara, Murfy, and a few Teensies, are sent to rescue captured Teensies and save the Glade of Dreams from the return of the nightmares. This game can be played with up to 4 players and there are many different unlockable and playable versions of the aforementioned characters (with the exception of Murfy, who can be used to move elements in levels to help the player(s) progress) that players can choose from. This platforming adventure also has musical levels and bonus, unlockable levels from Rayman Origins! Plus, you can scratch off lucky tickets to win more Teensies (characters you’ll need to rescue to unlock more levels), Lums (in-game currency used to unlock more playable versions of the characters), and Creatures (pet-like characters that award you Lums every certain time limit whenever you visit them)! There’s also a multiplayer mode, called “Kung-Foot,” where players can team up against each other in Rayman’s wacky version of soccer! And, there are daily and weekly challenges where you test your skills against other players online. The better your score, the more Lums you earn.

This series shows my SOLO playthrough of the game, in which I attempt to complete the game 100% on my own while trying out the different versions of the characters. 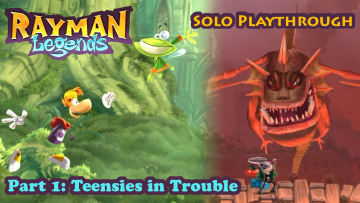